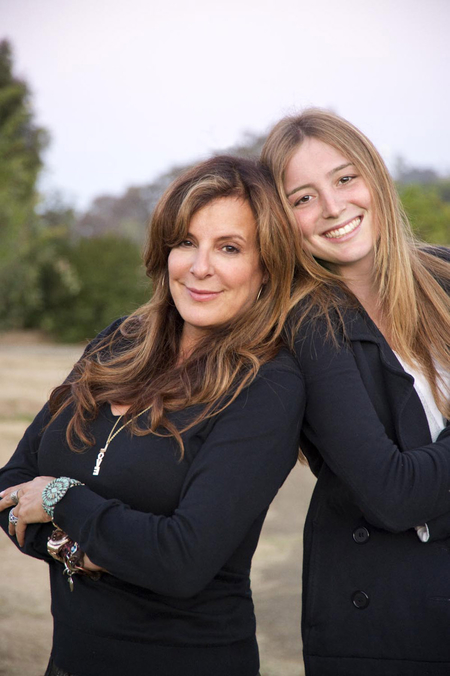 In case you’ve only just landed on this site, let me mention at the start that I’m the Mom in this love story. Even though I may be best known as a makeup-artist turned entrepreneur and philanthropist, truly, my most important role in life is that of mother to my three beloved children.

Oh, for the record, if you Goggled me, you might come across another Victoria Jackson, the SNL comedienne turned right-wing darling. That would NOT be me. I’m the Victoria Jackson of infomercial fame who challenged the status quo of the makeup world by honoring the natural beauty of all women. My foundation for the “no-makeup make-up” look became the crown jewel in my cosmetics company that today has sales of over a half-billion dollars. But the focus of my work now has to do with a different foundation — one devoted to funding research to unravel a medical mystery that up until four years ago was seen as incurable and often fatal. My husband Bill and I created the Guthy Jackson Charitable Foundation in 2008 when our otherwise perfectly healthy, gorgeous, extraordinary teenage daughter Ali was stricken with this rare autoimmune disorder that threatened to take her from us.

Living our worst nightmare, I began to write this book out of a desperate refusal to accept the unacceptable. Part of the process was to have an outlet, a confidante. Part of it was to keep track of the history we’d made by launching the foundation in record time. During most of that first year, Ali knew her affliction was scary but asked not to know the specifics of the diagnosis or prognosis. Back then, the scope of the book was more of a memoir. More of a “momoir”.

That first year, my dark humor helped me cope as the pages started to become more of a Mom-Noir. That was my fearful voice talking. Fear has been a recurring theme is my life. Fear is what has often motivated me and what I’ve battled at most turning points, past and present. That’s probably not what you expected to hear from a woman whose rags to riches story has been as triumphant as it has in other ways. Still, the more I focused on confronting fear, the more I realized that the most dominant theme for me has been something else:  survival. The survivor’s instinct is what’s allowed me to go further than I could have ever once imagined and to dig myself out of whatever hole that I found myself in, no matter how deep, or how dark.

The moral is: You can’t live in fear. You have to live like a warrior. You have to do more than survive.  I learned that from the wisest, most courageous person I know, my beautiful daughter, Alexandra Rose Guthy.

Ali has miraculously defied many odds, coming into her own as a young woman and now as a leader in the work of the foundation, helping to develop new ways of raising awareness and accelerating the time in which groundbreaking discoveries have been made and promise to shed light on a range of debilitating diseases. And in the process this book that began as a solo effort for me has become a shared journey for the two of us, a true mother/daughter love story of Saving Each Other.

In early 2008, if you Googled NMO, Neuromyelitis Optica, you would have found almost nothing, other than a brief, terrifying account of a little understood illness. Today, if you Google Ali Guthy, you’ll most likely be led to an extensive explanation as to what NMO is. But that by no means defines me.

I am a friend, sister, daughter, student, tennis champion, cupcake connoisseur, and a lover of all things chocolate. I am a leader, supporter, athlete, fan, and a fighter extraordinaire. I am a laugher, talker, listener, hugger, and supreme queen master of optimism in the universe. And I am also now an author.

I am all these things and more. But I am not a victim.

Five years ago, I never would have agreed to write this book; not out of insecurity, or spite, or pure hatred for the disease I harbor, but rather a deep-seated need to be ignorant. I was too young, too naïve, and too proud to confront the true nature of my disorder. I was a closet defeatist, too terror-stricken to challenge myself and overcome the burdens of panic and anxiety this disease has embedded within me.

But the lessons of Saving Each Other are about how anyone can grapple with the direst diagnosis and take action to positively transform reality. That was a story I wanted to tell.

Not in a self-help/how-to-cope-with-loss way but as a candid account of the deterioration of my erodible fears and my personal transition into adulthood. My mother and I had to agree to take the journey full-on, to scale the depths of despair and rise to the summit of triumph together, wherever it led. We had to relive every moment from first being diagnosed with an incurable disease, to initiating progress, change, and hope for the entire world of medicine.

When your child or anyone’s child is stricken with a parent’s worst nightmare or when you as a child know something’s wrong but aren’t ready for all the details just yet, you have a choice. You can fall apart and stick your head in the sand or you can face the truth and fight back!

Saving Each Other can be everyone’s story.