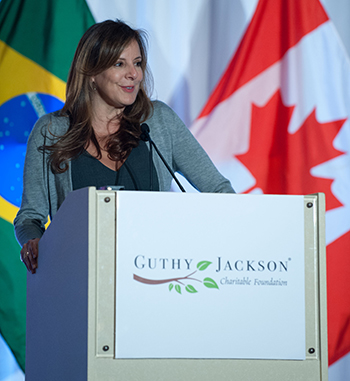 Victoria Jackson founded the Guthy-Jackson Charitable Foundation (GJCF) to cure neuromyelitis optica (NMO)—a devastating, rare autoimmune disease. In 2008, after their daughter was diagnosed with NMO, Victoria and her husband Bill Guthy established this innovative organization. With Victoria at the helm, GJCF has achieved quantum progress at record speed.

In the prior hundred years, there were no clinical trials, no approved drugs, and no hope for a cure for NMO. Based on GJCF science, four international clinical trials were completed in just five years, and in 2019 the first drug was approved for NMO. More new drug approvals are anticipated in 2020, and the GJCF blueprint is now seen as a model to solve other complex diseases—from autoimmune to cancer.

In 2017, Victoria was inducted by Gloria Steinem into the National Women's Hall of Fame, and in 2018, she was honored with the 2018 Pontifical Key Advocacy Award at Unite To Cure: Fourth International Vatican Conference for her visionary approach and transformative impact in advancing human understanding and funding for neuromyelitis optica (NMO) and autoimmune related diseases.

Victoria has written four books—most recently publishing The Power of Rare: A Blueprint for a Medical Revolution. She and her daughter Ali Guthy co-authored the acclaimed Saving Each Other, a chronicle of their mother-daughter journey to overcome the odds of a terrifying diagnosis. She currently sits on the board of the Los Angeles County Museum of Art, as well as the board of UCLA Health Systems.

Victoria and Bill reside in LA and are the proud parents of Evan, Ali and Jackson. 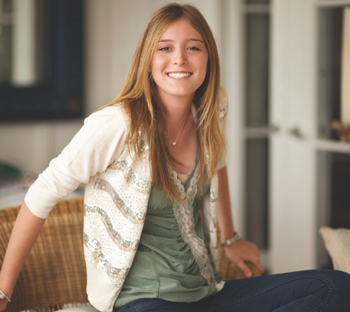 Twenty-three year old Ali Guthy has been recognized from an early age for her leadership acumen and her gifts as a spokesperson. An activist, advocate, and author, Ali has addressed a range of subject matter that reflects her passion for public service and her focus on the principle of beneficence—a lifelong commitment to positively impact the lives of others.

In June 2015, Ali graduated with honors from the University of California, Santa Barbara (UCSB) with a double major in Psychology and Sociology. While at UCSB, she served as Associated Students President, representing the entire undergraduate student body—as many as 20,000 students—on all local, state, and national levels. Her duties included managing a budget of $10.6 MM and supervising 33 career staff members as well as more than a 300-student staff. During her time at UCSB, Ali also served as the Hunger-Houseless Coordinator for the Community Affairs Board (CAB), organizing weekly volunteer events to serve meals to the local houseless community. Additionally, Ali co-Founded, and served as President of Swipes for the Houseless, a program that enables students to donate unused meals from their college dining plan to those impacted by hunger.

Ali’s leadership journey has no doubt been shaped by the diagnosis, received at age fourteen, of Neuromyelitis Optica (NMO)—a rare autoimmune disease with devastating consequences and no known cure. Ali is a co-Founder of the Guthy-Jackson Charitable Foundation that she and her parents established to fund lifesaving research and accelerate a cure. Since 2008, Ali has served as the public face of NMO to help transform the medical landscape. As the author of several articles and the co-author of the memoir, “Saving Each Other – A Mother-Daughter Love Story” she has shared her miraculous, empowering story with a wide range of audiences.

In May 2016, Ali Guthy was invited to speak at the Vatican’s Third Annual Conference on Regenerative Medicine and received an honor for her ongoing advocacy.